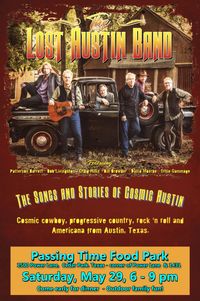 This will be our first show since the shutdown in 2020. It promises to be a spirited show!