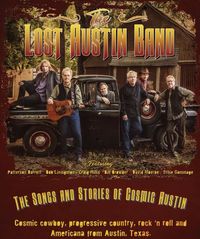 "...comes through loud and clear: Barrett's earnest and charming songs and playing to match...there's a thread of honesty and soulfulness..." - Charleston Gazette

"...tender ability to tap into the vagaries of midlife without sounding like overgrown teen angst." - International Acoustic Music Awards

Give'em What They Want CD cover

About the upcoming CD release:

As in his two previous solo outings, Barrett makes much of the music on this new disc himself, but there are plenty of guest appearances by friends and peers. Featured performers include Jim Lauderdale, Walt Wilkins, and Stuart Duncan, plus Gurf Morlix and Buddy Miller sharing vocals with Barrett on the single “3 Young Alleycats.” Credited to “3 Old Alleycats,” the song is a reminiscence of the days gone by when Morlix, Miller, and Barrett were knocking around Austin. In it, the three declare wistfully, “The universe will never be the same again,” but then muse “How long we can howl at the moon, no one can tell.”

The music is solidly Americana, with nods to influences as diverse as The Band, Little Feat, and Gram Parsons, all of whom Barrett cites as inspirations.

At times the songs lean toward the country side of things, as in the slyly humorous, two-step inducing “Elephant In The Room” (with Lauderdale on harmony vocal.)

But there are also introspective singer-songwriter moments, notably in “If I Only Knew How,” with Barrett finding himself unable to help those close to him who need it the most.

Barrett may be best known for his sideman work (everyone from Chuck Berry to Jerry Jeff Walker to Buddy & Jim), but he’s amused by the notion that the CD represents some sort of debut as a front man. “…yeah, that’s…interesting, since I’ve been writing, recording, and performing my own songs for…well, really, since I was a teen”.

Patterson intends to spend the bulk of 2018 touring behind the record. “It’s really about the songs; these songs show up, and I feel obliged to give them a chance to find an audience. So it’s sort of like, ‘The Songs of Patterson Barrett on Tour (accompanied by Patterson Barrett)’ If I don’t sing ‘em, who else will?”